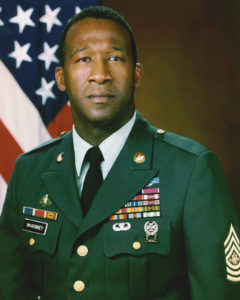 A man who investigators say purposely struck a person with his car in Pentagon City last week was formerly the top enlisted member of the U.S. Army.

Police say Manassas resident Gene C. McKinney, 59, had picked up commuters from a slug line and was driving north toward Washington when the commuters demanded to be let out of the car because, they claimed, McKinney was driving fast and erratically.

After McKinney let them out on the 1100 block of South Eads Street, one man took out a camera and tried to snap a photo of McKinney’s license plate. That’s when McKinney hit the gas and struck the man with his car, according to police. He was arrested and charged with attempted malicious wounding.

McKinney, who’s now out on bond, was the 10th Sergeant Major of the U.S. Army, serving from 1995 to 1997. As the top non-commissioned member of the Army, McKinney was responsible for advising the chief of staff and acting as a liaison between soldiers and Army leadership. He was the first and remains the only African American to hold the post.

McKinney’s tenure as Sergeant Major was marred by numerous accusations of sexual harassment, although he was eventually acquitted of all harassment charges.