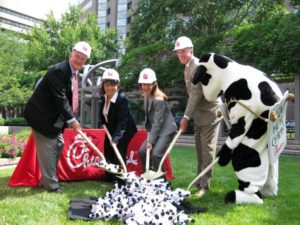 When Chick-fil-A does a grand opening, they do it big. The opening of the new Crystal City store at 2200 Crystal Drive will be no exception.

The reason people would brave the cold for a fast food restaurant opening? The store is offering a one-year supply of free Chick-fil-A meals to the first 100 adults in line (a $260 value).

The queue will be set up in the park across the street, so the campers don’t get clog the sidewalk. A company spokesperson said 200 people lined up 24 hours prior to a restaurant opening in Denver last week for the same “First 100” promotion.

In advance of the opening, Chick-fil-A will also be doing a big sandwich giveaway. The restaurant will distribute 10,000 chicken sandwiches during the lunch hour of Nov. 15 and 16.

Chick-fil-A says the store, which will employ nearly 50 people, is the result of years of market research.