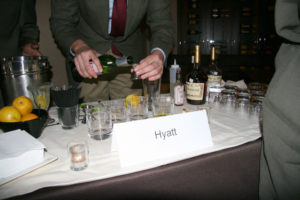 The neighborhood booster group pitted mixologists from three Rosslyn hotel bars against one another. Their goal: to concoct a drink worthy of being dubbed Rosslyn’s “Skyline cocktail.”

Guests sampled their spirits — multiple times, in some cases, to be thorough — and then voted for their favorite by placing dollar bills in each mixologist’s jar. The winner was the home team: with nearly 300 votes cast (and donated to A-SPAN) Hotel Palomar’s tropical, fruity cocktail beat out cocktails from the Marriott and the Hyatt.

With due respect to the Hotel Palomar, the Hyatt’s Michael Bryan was robbed. His cocktail, “At Ease,” was the a work of boozy art. Good news: if you weren’t there, you can either go to the Rosslyn Hyatt and order the drink, or make it yourself using the recipe below. Cheers!

Pour Pernod into an old fashioned glass. Add ice and let sit until Pernod turns opaque (this technique is called ‘louching’). Swirl Pernod so that it coast the inside of the glass and then dispose of excess mixture.

In a mixing glass, add the rest of the ingredients. Add ice. Strain mixing glass into Pernod-coated old fashioned glass.

Add a few cubes of ice, zest the rim of the glass with an orange peel, then drop the orange peel on top of the drink.