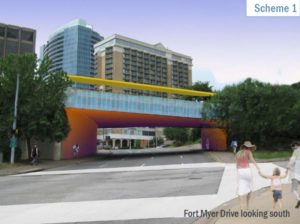 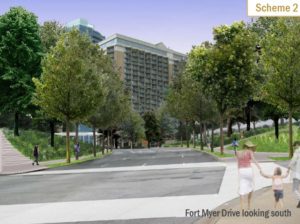 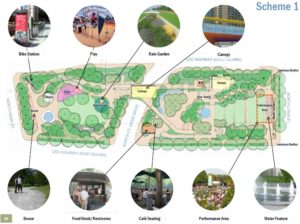 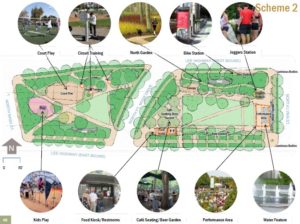 No matter how nice of a job county groundskeepers do, Rosslyn’s Gateway Park can’t escape the fact that it’s an urban park that’s surrounded by busy roads, largely devoid of things to do, and filled with so many paved paths and concrete structures that it hardly feels like a green space at all.

That’s why Rosslyn property owner JBG has been making a big push for the county to revamp the park while it plans to redevelop some of its own nearby properties.

Above are renderings of two possible options for revitalizing the park, both of which have been presented to the community during recent public meetings.

“Scheme 2” is the most striking option. It would remove many of the concrete structures, including a large bridge that connects two sections of the park that are currently separated by Fort Myer Drive.

“The idea is to make it more accessible, because some of these concrete structures serve as barriers to entry into the park,” says Cecilia Cassidy, executive director of Rosslyn BID and Rosslyn Renaissance. “It’s actually a great park, once you get inside it.”

Cassidy says special attention is paid in the plans to “active space,” like a play area or an area designated for certain sports. Another focus is a new performance area, which could increase the capacity of events like Rosslyn’s outdoor summer movie screenings and the annual Jazz Fest.

A cafe and a possible beer garden are incorporated in the plans as well. Cassidy says having a food option would increase attendance at events held in the park.

“In order to make the programming successful, you really need a food service,” she said.

Just don’t hold your breath waiting for the changes, which are currently in a very early planning stage. It will likely be “many years” until any sort of construction would get underway, we’re told.