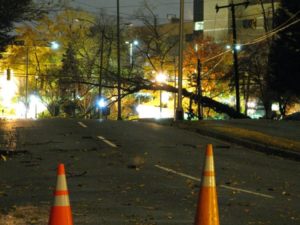 (Updated at 3:15 a.m.) A brief but intense thunderstorm ripped through Arlington around 12:45 this morning, bringing with it high winds and driving rain.

A 54 mile per hour wind gust was recorded at Reagan National Airport during the storm, which covered area roadways with wet leaves and, in some cases, trees and utility lines. As of 3:10 a.m., 2,400 Dominion customers were without power in Arlington.

The most significant damage was reported in Arlington’s Tara-Leeway Heights neighborhood, near Virginia Hospital Center. Downed trees and utility lines blocked numerous side streets, which were darkened by the power outage. County tree crews were out in the neighborhood with chainsaws and wood chippers at 2:30 this morning.

A large tree and live power lines also fell across George Mason Drive, next to the hospital. Police have shut down George Mason Drive between Washington Boulevard and 15th Street while Dominion cleans up the mess. The road is expected to remain closed through the morning rush hour.

Storm damage was reported in the following locations:

Update at 9:55 a.m. — The number of Dominion customers without power is now below 300. However, the medical offices of Virginia Hospital Center (not the hospital itself) are among those in the dark. Dominion spokesperson Le-Ha Anderson says crews hope to have power restored there within an hour.

Update at 10:00 a.m. — WJLA meteorologist Adam Caskey says that after analyzing radar data, he believes there’s a slight possibility that a tornado hit part of Arlington. 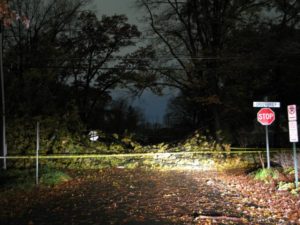 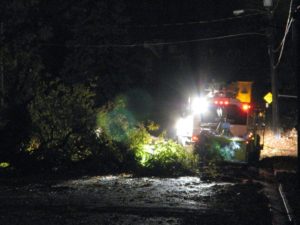