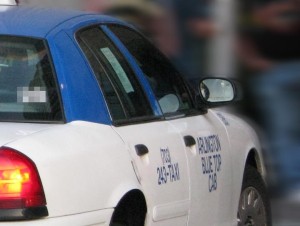 A young woman is suing Arlington Blue Top Cab, claiming she was sexually assaulted after a cabbie dropped her off in a dangerous neighborhood at 3:30 a.m. because she was $1.95 short on the fare.

According to the lawsuit, first reported by Courthouse News Service, the woman was taking a Blue Top taxi from Arlington to Alexandria early on the morning of Saturday, Nov. 22, 2008. When the cab arrived at her house in Alexandria, the woman says she tried to pay with a credit card.

The cabbie ran the card twice and each time said the card was rejected, when in fact the payment went through, according to the lawsuit. When the woman only had $18 in cash for the $19.95 fare, the driver is alleged to have insisted upon driving her to an ATM.

The ATM, located in a high-crime section of Alexandria, was out of service, the lawsuit claims. After the woman got back in the cab and told the driver about the out of service ATM, he is alleged to have pulled over, taken the $18 she had in her possession, and — despite pleas for her safety — forced the young woman out of the cab.

“Immediately after being ejected by [the driver] from the Blue Top taxi cab, while attempting to walk to a safe location, [the plaintiff] was approached on the sidewalk by a man who indicated he had a gun,” the lawsuit says. “The man threatened to shoot [the plaintiff], then dragged her into a nearby parking garage, where he brutally sexually assaulted her.”

The lawsuit, filed on Nov. 12 in Alexandria Circuit Court, seeks $5 million in damages from Blue Top Cab and the driver for negligence, fraud, breach of contract, false imprisonment and the infliction of emotional distress.

A call to Blue Top Cab management has not been returned.