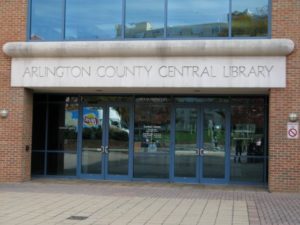 After two years of deep cuts, county libraries and parks may be spared in the upcoming budget process.

Speaking to the League of Women Voters last night, county manager Barbara Donnellan said she does not expect to make any cuts to the libraries or parks in her proposed budget for financial year 2012.

At the same time, however, Donnellan cautioned that with Arlington facing a $25 million budget gap, the libraries will likely not see a restoration of hours to pre-2009 or pre-2010 levels.

At one point, Donnellan reflected on her failed effort to close the Cherrydale library, which was met with considerable public outcry. She says that she learned her lesson about community attachment to libraries.

“I’m not doing it any more, I’m done,” she said. “It’s apparent to me that every library is going to stay open.”

In a question and answer session, one attendee said she was concerned that the county seems willing to allow a deterioration in the quality of services system-wide, instead of summoning the political will to close facilities when it makes practical and financial sense. Donnellan said that while the county must carefully weigh its budget priorities, current facilities must be adequately funded.

“As long as we’re going to keep them, we have to maintain them, and that takes money,” she said.

Donnellan pledged to close the current budget gap with a balance of spending cuts and revenue increases. She will host a public budget forum for residents from 7:00 to 9:00 p.m. on Thursday, Dec. 2, at the Arlington Central Library auditorium.