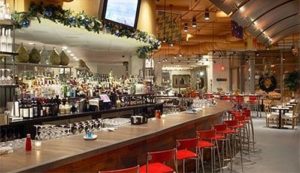 Owners told employees last night that the restaurant will be closing after tomorrow, and that an American Tap Room bar/restaurant will take its place after renovations, according to sources.

We’re told that the restaurant, which opened in 2005, enjoyed commercial success at first but later struggled to fill tables inside the cavernous space. It was co-owned by restaurateur Franco Nuschese, of Cafe Milano fame.

A restaurant source estimated that Sette Bello employed around 30 people.

Renovations are expected to take several months, but no formal time frame has been announced.

Replacing Sette Bello will be American Tap Room, a bar/restaurant that currently has locations in Reston and Bethesda, according to an employee who wished to remain anonymous because he was not authorized to speak on the record.

Although American Tap Room will have numerous TVs and a game time menu, it’s not a sports bar per se (as previously reported).

“Upscale comfort casual dining,” is the way the employee described the restaurant. “It’s going to be familiar and modern at the same time.”