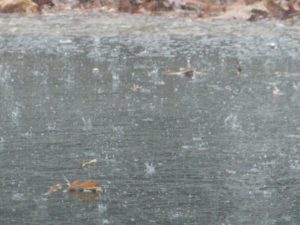 Reports of isolated pockets of high water and traffic light problems have been trickling in over the past hour as rain continues to fall.

According to scanner traffic, the ramp from westbound Route 50 to westbound Washington Boulevard has been shut down by police due to high water. Likewise, police are checking out a call for high water in the area of North Glebe Road and Chesterbrook Road.

Heavy rain invariably tends to cause problems with traffic lights in the county.

Earlier, it was reported that the lights at the tricky intersection of South Hayes Street and 15th Street were flashing.

Now, police are heading to the equally tricky intersection of Fort Myer Drive and North Lynn Street to direct traffic. Traffic lights are reported to be completely dark in the area. (We’ve moved updates on the power outage in Rosslyn to a separate post.)

Update at 11:25 a.m. — There’s a large pool of standing water on the HOV lanes of I-395 approaching the 14th Street Bridge. Traffic cameras show that it’s in the same spot as the pool of water left by a spring storm, shown in one of the photos below.

The water caused a car to stall out in the left-hand lane. Police are now on the scene 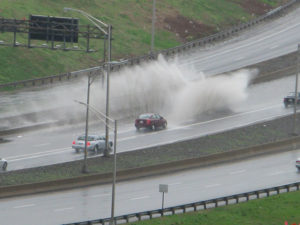 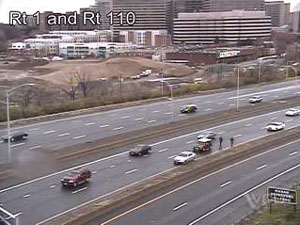