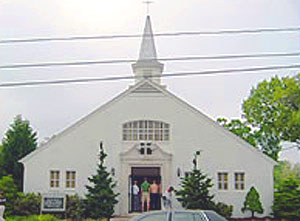 A crew from Dateline NBC will be filming the evening mass at Our Lady Queen of Peace Catholic Church in South Arlington on Saturday. The church is being featured for its upcoming humanitarian mission to Haiti.

A delegation of parishioners and Remote Area Medical volunteers will be leaving for a two-week trip to Medor, Haiti on Sunday. Together, the group will conduct a medical clinic for the cholera-ravaged town of 40,000. They will also repair roads and build an airstrip to allow air ambulances to deliver critical supplies.

“Medor has no running water, no sewage or trash disposal, impassable roads and inadequate agriculture,” the church said in a press release. “Like the rest of Haiti, the village has been devastated by a succession of hurricanes, earthquakes and now the deadly cholera epidemic this year.”

The earthquake and aftershocks that reduced Port au Prince to rubble earlier this year also damaged schools, medical clinics and churches in Medor. It also resulted in an influx of refugees to the area.

Our Lady Queen of Peace, located in Arlington’s Green Valley neighborhood, has supported missions in Medor since 1997.

The Dateline special is set to air on or around Jan. 12, the one-year anniversary of the earthquake.