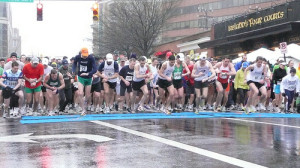 Registration opened today for the 2011 George Washington Parkway Classic, and a number of other local winter/spring races are also currently in registration mode.

The GW Parkway Classic will be held on the morning of Sunday, April 10 in Alexandria. There is a 10 mile course and a 5K course, which start at either Mt. Vernon Estates or Belle Haven Park and end at Oronoco Bay Park in Old Town.

The 2011 race calendar kicks off on Sunday, Feb. 13, with the annual Love The Run You’re With 5K, a Valentine’s Day-themed race for couples and singles alike. The run starts and ends at Pentagon Row, followed by a post-race party.

On Saturday, Feb. 19, the GW Birthday Classic will take runners on a 10K course up and down Eisenhower Avenue in Alexandria.

And on Saturday, March 12, the second annual Four Courts Four Miler will invade the Courthouse and Rosslyn areas. The race sold out last year and attracted a big crowd, despite windy, rainy weather. Even if the weather is miserable again this year, there will at least be “food, friends and a bit of liquid courage at the end of the rainbow,” as organizers describe the post-race festivities.