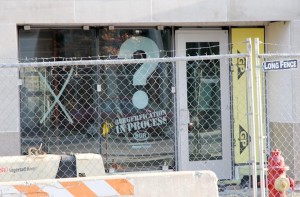 Over the past few years Arlington has experienced an amazing boom of new bars and restaurants (like the future BGR The Burger Joint in Clarendon, pictured).

But what exactly is fueling the expansion? The openings have far outpaced Arlington’s population growth. From a purely economic standpoint, there can only be a few explanations for how so many new bars and restaurants can open and stay in business.

One theory is that we’re spending more and more money going out to restaurants and bars. With so many new options, perhaps residents feel more compelled to go out when they would have otherwise stayed in.

Anther theory is that we’re spending less at older bars and restaurants. There have been a few restaurant closings lately but, then again, there have been many more openings than closings.

Yet another theory is that the new eateries and night spots are bringing more people into Arlington — either from the District, Fairfax County or elsewhere.

But the theory that’s perhaps most intriguing is that with all the new places to go out to, Arlingtonians are feeling less and less compelled to head into the District for dinner and entertainment. To attempt to prove or disprove that theory, we’ve devised the following poll.