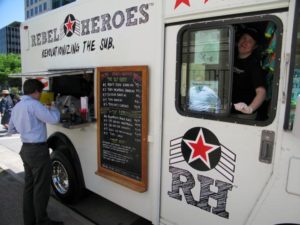 The insurrection has been quelled.

The banh mi sandwich truck launched to critical acclaim and long lines in April. It apparently did not generate enough business to justify its existence for another year.

Carman, who just defected from Washington City Paper to the Washington Post, says that Rebel Heroes served its last customers on Oct. 8. A month later, the business was closed and the truck was sold, without so much as a tweet announcing the move.

Like Che Guevara, the Rebel Heroes brand will live on in the memory of its followers. The truck itself, however, is soldiering on. It was sold to a local restaurant manager who has converted it into The Big Cheese — a gourmet grilled cheese sandwich truck.

We’ve been following the truck on Twitter as it prepares to launch in Arlington. When it does, be sure to pour out a little of whatever gourmet soda it sells, in memory of our fallen comrade.

Hi Rebels, As some of you have heard from the media today, we’ve had to take the rebellion back underground. We’re all working on other projects and between everything that’s happening with our own projects (such as graphic design work/ consulting forme and babies arriving in the Spring for some of us–we are a family business after all) and the amount of resources (time being a major one) it requires on many levels, it’s best to go out on top! I can’t express how much I’ll miss seeing all of our regular customers. That’s really what kept me and the frontline team (Liz & Eileen) going all those crazy days on the hot truck. But I don’t want to say there won’t be another revolution! Anything can happen! Thanks so much for your support and patronage. We won’t forget all of you! You all rock! Please feel free to hit me up at [removed] 🙂 — xoxo, TAN