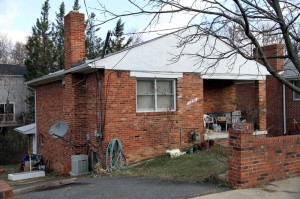 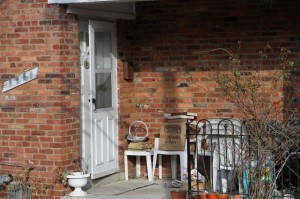 This is the house on 11th Street South in the Arlington View neighborhood where alleged “wannabe jihadist” Awais Younis lived with family members.

Younis, also known as Sundullah Ghizai and Mohhanme Khan, was arrested by the FBI last week and charged with threatening — via Facebook — to set off pipe bombs in Georgetown and on Metro trains.

“He stayed to himself, kind of like an outsider,” LaRondre Gaskins told WUSA 9. “No friends but certain things that happened he was real weird about, like when 9-11 happened… he clapped about it in class.”

Younis, who is in his mid-20s, will undergo a court-ordered mental health evaluation. A court hearing is scheduled for Dec. 21.

All was quiet at Younis’ house this morning. There was little activity on the street, save an elderly woman taking items out of her SUV.

On the porch in front of the red brick home, Encyclopedia Britannicas were stacked haphazardly in a potato chip box. Down the side of the house, an Afghan rug was folded next to a Dell computer box, apparently waiting to be taken away as trash.