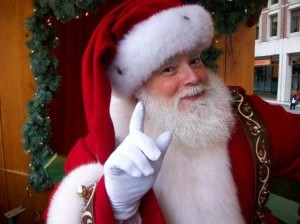 Santa’s appearance will be particularly meaningful this year, as the Arlington County Fire Department’s Engine Co. 3 is preparing to depart for new Lee Highway quarters in 2011. The Cherrydale Volunteer Fire Station at 3900 Lee Highway will remain as a community resource; it is listed on both the state and national historic landmark registries.

The Cherrydale station’s holiday celebration has changed over the years, even as it has grown in popularity. Up until 1960, Santa brought refurbished toys to give away. Following several years of a gift exchange, the Cherrydale Volunteer Fire Department in 1964began buying gifts for distribution. Typically, several hundred children show up for the afternoon festivities.

Organized in 1898, the Cherrydale Volunteer Fire Department includes members who are cross-trained as both firefighters and emergency medical technicians. The volunteer department owns and operates Light and Air 103, which provides emergency lighting, salvage and other services. The volunteers also own a general services vehicle called Utility 103.