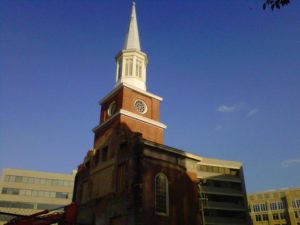 A lawsuit to block an affordable housing deal between the state, the county, a developer and a Clarendon church has been dismissed by a federal appeals court.

In 2004, the county gave its blessing to a plan that would build an eight story affordable apartment complex, known as The Views at Clarendon, on top of the First Baptist Church of Clarendon. The plan was touted for its ability to increase the affordable housing stock in Clarendon while paying for the construction of a new church sanctuary.

The developer would buy property from the church, thus supporting the sanctuary construction, and then pay for the apartment building’s construction with the help of nearly $50 million in loans and tax breaks from the county, the state and the federal government.

After considerable neighborhood outrage and two legal challenges to the building’s imposing design failed to stop the development, Clarendon resident Peter Glassman filed suit in Nov. 2009, accusing Arlington County and the Virginia Housing Development Authority of violating the First Amendment separation of church and state by facilitating the development and providing subsidies to the church.

A U.S. District Court judge dismissed the case in April. Glassman appealed, and in the latest development, the appeal was rejected on Thursday.

“We can find no factual allegations that support a claim that the County sought to advance the First Baptist Church’s faith, to spread the message of the First Baptist Church, or to become entangled in its religious affairs,” Niemeyer wrote. “Rather, the County’s only interest was to accomplish the secular end of having affordable housing constructed in a highly urban area of Arlington County.”

No word yet on whether any further legal action by Glassman may be forthcoming. Meanwhile, construction of The Views at Clarendon has been progressing steadily.

Update at 4:30 p.m. — The county has released a press release about the case. Here’s an excerpt, after the jump.

“We welcome this decision,” said Arlington County Board Chairman Jay Fisette. “The Court has reaffirmed that the Board’s goal in approving the Views at Clarendon was to provide affordable housing less than one block from a Metro station in the heart of Clarendon.”

Should Mr. Glassman wish to appeal this decision, he could ask the Fourth Circuit panel to reconsider its decision, or he could ask for a hearing en banc, meaning before not just a panel, but all judges of the Fourth Circuit Court of Appeals. He also would have an option to seek a writ of certiorari from the United States Supreme Court. None of these avenues for further review is available automatically; each would have to be granted in the respective Court’s discretion.