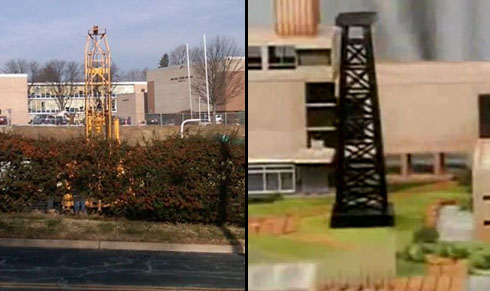 The photo (above left) of some sort of yellow rig near the Bishop O’Connell High School football field has neighbors speculating, according to TBD. Some believe that work is getting underway on a controversial athletic field renovation before the project has been formally approved by the county board.

We don’t know about that, but it does vaguely remind us the oil derrick from a 20-year-old Saved by the Bell episode entitled “Pipe Dreams,” in which oil is discovered underneath the Bayside High School football field. For a while, everybody thought the oil money was going to bring exciting improvements to the school, but in the end a beloved duck died and the whole situation was judged a fiasco.

Not saying the same thing is happening at Bishop O’Connell — just that it’s wise to pause and think before drilling near football fields.

Photo above left by David Swiger, via TBD. Screen capture above right via YouTube.