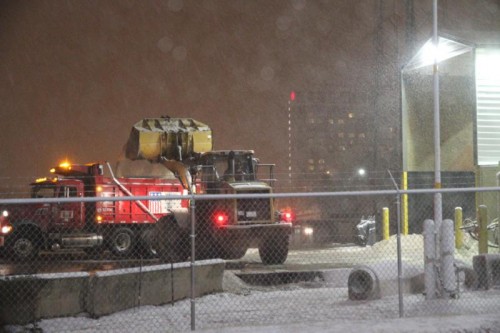 Freezing Rain and Snow Hits After Dark — It might not have been the monster storm that’s now hitting New York City and southern New England, but a relatively short period of freezing rain and snow made for some slippery conditions during rush hour last night. Most of the inch or so of snow we received is expected to melt today. If, however, unshoveled snow in front of someone else’s property is causing problems, you can report it via the county’s snow reporting form. Meanwhile, if you’re flying out of Reagan National today, you can check flight status here. Numerous flights have been canceled.

Dyszel Doc to be Screened at Artisphere Tonight — Dick Dyszel is a local television legend. During the ’70s and ’80s he played popular characters like Bozo the Clown and Count Gore de Vol on the Washington airwaves. “Every Other Night Is Halloween,” a documentary about Dyszel’s improbable career, will be playing at Artisphere. The film also examines the “de-evolution of local television” and the rise of the internet. The screening starts at 8:00 in Artisphere’s Dome Theater. Tickets are $6.

Shooshan Secures Financing for Founders Square Building — The Shooshan Company has successfully secured $100 million in financing to build the future headquarters of the Defense Advanced Research Projects Agency in Ballston, part of the Founders Square development. (It’s worth noting that two workers were injured from a fall at the construction site yesterday.) A company representative says the financing allows them to concentrate on the construction of the building, which will be the first in Arlington to meet the DoD’s Minimum Anti-Terrorism Standards for Buildings. [GlobeSt.com]