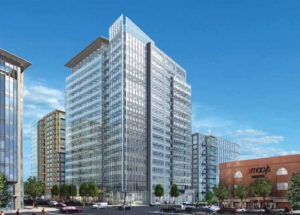 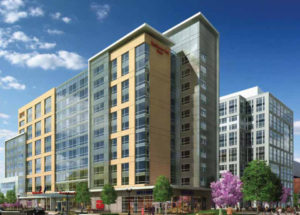 In due time, the big hole in the ground next to Ballston Common Mall will be filled with development and the view from the soon-to-open Rustico will be even less rustic.

Founders Square, located across Wilson Boulevard from the Liberty Center development (also owned by the Shooshan Company), will consist of two high-rise office buildings, one high-rise residential building, a large hotel, and a smaller building reserved for retailers.

Among the Founders Square office towers, one will be a secure building with a single tenant: the Defense Advanced Research Projects agency, which is relocating from Virginia Square. DARPA signed its lease more than a year ago. The other office building is still leasing.

The hotel, meanwhile, is expected to be a Residence Inn, at least according to architectural sketches. It was originally intended to be a residential building, but its use has since been switched to a hotel by the developer. The change still needs to be approved by the county.

The county’s site plan review committee will discuss the hotel proposal at a meeting tonight in Rooms 109/111 at Courthouse Plaza (2100 Courthouse Road). The county board is expected to take up the site plan amendment necessary for the hotel’s approval in December.

Developers argue that the Ballston area is in need of more hotels.

All told, Founders Square will consist of 1.1 million square feet of office, residential, hotel and retail space. The development could be ready for occupancy as soon as 2012.