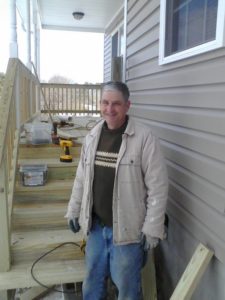 Anybody who’s active with the local Habitat for Humanity chapter probably knows Peter Salemme, a carpenter by trade and a tireless volunteer who has been working with Habitat since 1992.

Despite his regular volunteer work, Salemme has apparently not entirely satisfied his do-gooding instinct. At age 59, the married father of five has embarked on a mission to volunteer in 50 states in 50 weeks, all before his 60th birthday.

“A friend of mine passed away recently and the pastor talked at the service about when we leave this earth there are two dates on your tombstone separated by a dash. He said that life is about what you do with the dash,” Salemme told the Mt. Airy News in North Carolina, where he’s helping to building a house. “I recently celebrated my 59th birthday and I wanted to do something big with the dash before I hit 60.”

Salemme, who lives in a Habitat home he helped to build in Arlington’s Green Valley neighborhood, is no stranger to publicity for his good works. In 2006, the Washington Post profiled him after he moved to Biloxi, Miss. to help victims of Hurricane Katrina. Salemme, who had been working as a kitchen designer at the Home Depot in Falls Church, requested to be temporarily transferred to a store in Biloxi so he could spend his spare time rebuilding houses with the local Habitat chapter.

On his latest journey, Salemme has been to Mississippi, Alabama, Georgia, Florida, South Carolina and North Carolina. He often often relies on friends, churches and volunteers to help him find places to stay and food to eat.

So far Salemme has helped install kitchen cabinets for a family who miraculously survived a tornado, constructed an addition for a man paralyzed in a tornado and remodeled a foreclosed home for an unemployed truck driver. Through it all, Salemme has been maintaining a travel blog where he documents his experiences during his “year of service.”

Next on Salemme’s itinerary, according to the Mt. Airy News, is a a short stop back in Arlington before heading to Texas and points west.