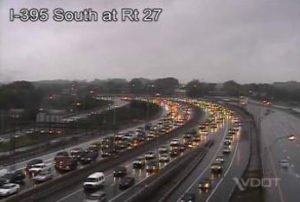 The Washington metro area is tied with Chicago for having the country’s most congested roads.

According to a new study, auto commuters in Washington and Chicago spend about 70 hours — nearly three whole days — of extra time in the car thanks to traffic. We beat out the famously congested Los Angeles area, where commuters only spend 63 extra hours in the car each year.

In the wake of the study’s release, the Northern Virginia Transportation Alliance, a group that supports additional spending on highway capacity and other transportation projects, issued a snarky press release “congratulating” the region for the distinction.

“Persistence pays off!” the Alliance proclaimed. “Years of state fiscal neglect and local opposition to planner’s priorities have finally moved the Commonwealth’s economic engine, Northern Virginia, to the top of the congestion-delay heap.”

Researchers with the Texas Transportation Institute, which conducted the study, came up with a number of general strategies to help alleviate traffic congestion, including: