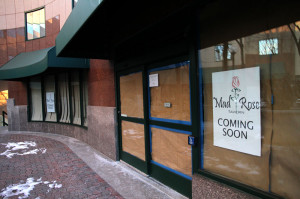 Clarendon’s Mad Rose Tavern is “getting close to opening day,” according to a new update on the bar’s Facebook page.

Once it opens, managers say the bar will feature a “legendary liquor selection,” including an emphasis on Scotch and Irish whiskeys.

General Manager Seamus Phillips told TBD that the extensive renovation of the bar’s space on the ground floor of 3100 Clarendon Boulevard has cost more than a million dollars. Pending county inspections, the tavern should open in early February, Phillips said.

As part of last night’s Facebook update, Mad Rose gave beer geeks something to look forward to with a sneak peak of its work-in-progress beer list. Selections included: