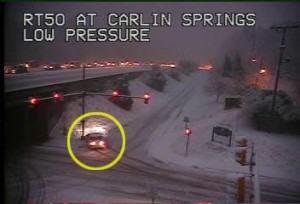 Update at 7:25 p.m. — A downed tree has completely blocked westbound Lee Highway near HB Woodlawn. Separately, a tow truck is on the way to assist a stranded ambulance on Washington Boulevard near the Navy Annex.

Update at 7:00 p.m. — Downed power lines and falling tree limbs are being reported throughout the area. Dominion is reporting more than 1,200 customers without power in Arlington. Dominion spokeswoman Le-Ha Anderson tells WUSA 9 that it may take more time than usual to restore power due to gridlock on local streets and highways.

Update at 5:40 pm. — Stranded vehicles are being reported on Glebe Road near Chain Bridge and at Washington Boulevard and I-395.

Update at 5:30 p.m. — Treacherous conditions are reported on parts of Carlin Springs Road and Patrick Henry Drive. Via a traffic camera (above) we witnessed a car slide down Carlin Springs near Route 50 and nearly strike a pole. The car was eventually able to reverse and continue on its way.

Update at 5:15 p.m. — Westbound Washington Boulevard has been shut down at Sycamore Street.

Traffic throughout the county has slowed to a crawl as roads become increasingly snow-covered and as nightfall sets in.

Police and firefighters report being delayed responding to calls due to heavy traffic.

Emergency responders have now been instructed to put chains on their tires to improve traction.