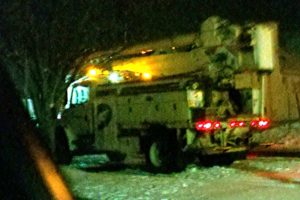 Much of Clarendon and Courthouse was in the dark Saturday night, at the peak of dinner and drinking time.

The 76-minute power outage forced restaurants like Fireworks in Courthouse to close for the night, while it drove business to other establishments where the lights stayed on, like Adams Corner and Spider Kelly’s.

Dominion spokesperson Le-Ha Anderson said 9,500 customers were affected by the outage, which occurred when a piece of equipment failed at the company’s substation at 3245 Wilson Boulevard.

One Twitter user reported: “I was at Northside [Social] when the transformer blew right behind the building. Big flash + bang, lots of smoke in the street.”

“Crews swiftly replaced it and we had all customers restored quickly,” Anderson said.