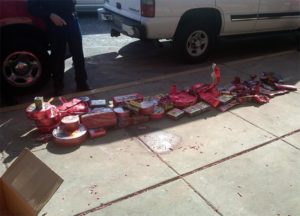 Firefighters initially responded to the Falls Church shopping center this morning for an activated fire alarm. They quickly discovered that the alarm was set off by fireworks being ignited inside the building.

Arlington fire marshals responded and, after determining the problem was more widespread than just one store, Falls Church Police and additional Arlington units were called in. Fire marshals are now conducting a sweep of the shopping center and confiscating illegal fireworks.

They’ve found enough fireworks so far to fill a 44 gallon trash can and a 18×12 box, according to fire department spokesman Lt. Gregg Karl, who noted that police will be stepping up their fireworks enforcement.

“Anybody who is caught lighting fireworks inside the building will be issued summons or arrested,” he said.