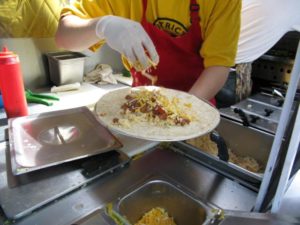 District Taco (5723 Lee Highway) hopes to have a permit to serve beer in time for some warm-weather cerveza drinking.

The popular new restaurant just applied for an ABC license from the state.

“We think it’s going to be a couple of months” until the license is granted, District Taco founder Osiris Hoil said. “We hope to have it by the summer.”

“A lot of people are asking for it,” Hoil added. “Our salsa makes people sweat… it would really go well with some beer.”

Hoil says he’ll keep the beer list small so that that he can keep the beer as fresh as possible. Among the brews he plans to serve are Negra Modelo, Modelo Especial, Pacifico, Sol, Corona and Tecate — all Mexican beers.

“No Coors Light,” Hoil said with a laugh.

Meanwhile, District Taco is offering special deals for public safety and military personnel. The restaurant is offering 50 percent off for police and firefighters and a free drink for members of the military.