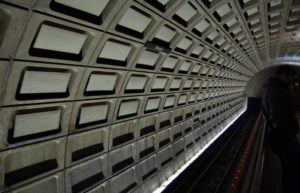 As reported last Friday, Metro officials have suggested that one option for plugging the agency’s $72 million budget gap would be to end service at midnight on Fridays and Saturdays.

The idea, which was floated and roundly criticized last year, would only save $5 million per year and would have to be combined with other cuts. This midnight cut-off was not included in Metro General Manager Richard Sarles’ proposed budget — he advocates higher subsidy payments from local governments — but board members are at least investigating the possibility of ending service earlier than the current 3:00 a.m. on weekends.

Arlington County Board Vice-Chair and new Metro board member Mary Hynes says the Metro board asked questions about the feasibility of ending service at least an hour or two earlier.

Hynes tells ARLnow.com: “All of us wanted to see — if you did it until 2:00, what was that dollar savings? Go hour by hour and tell us not only how much money it saved, but how many riders might be affected.”

She suggested the board is looking at bus service options should Metro decide to reduce rail service at night.

“If we did this, can we fill in with other service?” she asked rhetorically.

Hynes said board members also asked about whether closing certain under-utilized stations at night (like stations near the ends of Metro lines) could potentially save money. Hynes acknowledged, however, that a reduction in late night could have negative implications for Arlington’s nightlife.

“I worry about it for Clarendon, absolutely,” she said. “Clarendon works because of Metro, there’s no question about it. So it’s really important to Arlington that we figure this out in the right way.”

Supporters of reducing late night service say that the extra hours of downtime could give crews more time to perform maintenance work. Critics question whether such a move would result in higher rates of drunk driving in the area, and whether the move could hurt certain sectors of the local economy.