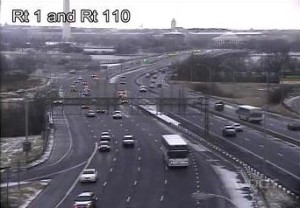 Last night’s sleet and snow seems to have pulled off the trick of actually improving traffic.

Right now it’s clear sailing in Arlington on I-395, I-66, Route 1, Route 50 and Columbia Pike. Traffic volume has remained light and no major problems are reported.

Many side streets are still covered in a thin frozen glaze, but are passable.

The storm, which left less than an inch of accumulation, prompted Arlington Public Schools to open on a two-hour delay. The county and federal governments are open with an option for unscheduled leave or telework.