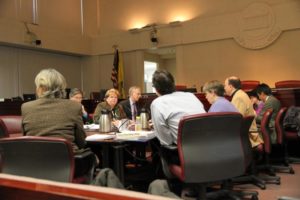 Officials from Arlington’s economic development office asked the county board to fund the county’s tourism promotion efforts now that the hotel tax surcharge that funded such efforts is being allowed to expire.

“I think we have a great program,” Arlington Economic Development Director Terry Holzheimer said at a board work session this afternoon. “The program has value.”

“This board has been put in a very difficult position,” said board member Jay Fisette, adding that he  hope to “come up with some way to share” the cost of tourism promotion with local hotels to save money from the already-stretched county budget.

Although Arlington has developed “much, much stronger ties to the local hotel industry,” Holzheimer told the board that he did not believe hotel operators could be persuaded to make a voluntary contribution to a tourism fund from their bottom line.

“Even if we got a few to do it, I don’t think the majority would do it,” he said.

With that in mind, Holzheimer asked the board to allocate $450,000 from the county’s budget to fund the Convention and Visitor service between between Jan. 1, 2012, when the current surcharge expires, and June 1, 2012, when the surcharge could be reinstated.

Holzheimer said he believes the Virginia General Assembly, which rejected the renewal of Arlington’s 0.25 percent hotel tax surcharge last month, might be persuaded to to pass it next year.

“I do believe we’ll mount an effort next year and be successful,” Holzheimer said.

Board member Barbara Favola, however, was skeptical of the General Assembly passing an Arlington-friendly tax measure.

“I don’t think that’s a realistic position,” she said.

The board will adopt a final FY 2012 budget in April.