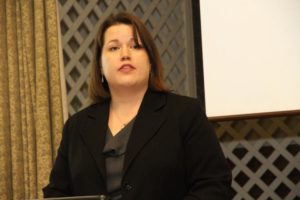 It was ladies night at the Lyon Park Community House last night. A capacity crowd that included most of the local political establishment applauded as four Democratic women announced their candidacy for public office.

Stephanie Clifford, a Democratic precinct captain and a new Green Valley (Nauck) homeowner, was the closest thing to a surprise. Clifford announced that she is running for the 49th District House of Delegates seat currently held by Del. Adam Ebbin, who’s running for state Senate.

“I’m sure a number of you are surprised to see me up here,” she said. “But I found a reason to serve and thought I’d step up.”

“One thing that is clear when you meet Stephanie is that she has a true commitment to community values and progressive values,” he said. 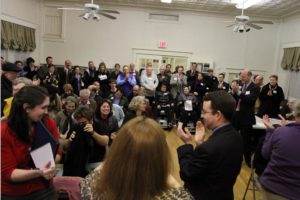 School Board Chair Libby Garvey announced that she will be seeking the nomination for the state Senate seat held by the retiring Sen. Patsy Ticer.

“No work gives me greater satisfaction then public service,” Garvey said. “But there are things i want to do for you now that I really can’t do as a school board member.”

“We’re in trouble as a nation and a state,” Garvey continued. “We’re digging ourselves into a hole. We’re not investing like we need to. Education, transportation, infrastructure, the environment, the health and welfare of our citizens — we need to invest in the future. That’s why I want to be a state Senator.”

Ebbin, who is also running for Ticer’s seat, attended the meeting but did not give a speech. Instead, supporters did the talking by wearing “Ebbin for State Senate” stickers and distributing fliers that beckoned Democrats to “join the A-Team.” 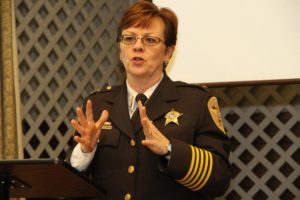 County board member Mary Hynes and Sheriff Beth Arthur rounded out the candidates program. Both announced their bid for re-election. So far, neither faces any opposition.

Also speaking last night were county board member Mary Hynes and Sheriff Beth Arthur, who both announced their re-election bids.

After the meeting concluded, other potential candidates weighed in on their plans.

Del. Bob Brink told ARLnow.com he expects to make a decision on whether to run for the seat of the retiring state Sen. Mary Margaret Whipple — who received a long standing ovation at the meeting — by the end of next week. Brink’s decision will likely be a deciding factor for whether other potential candidates, like Del. Patrick Hope, toss their hats into the ring.

Jay Fisette, mentioned as a possible state Senate candidate, said that he has decided not to run. His county board colleague Barbara Favola, however, said she is planning to run for Whipple’s seat.

“Look to your right, look to your left,” he said. “One of the three of you are probably running for office.”