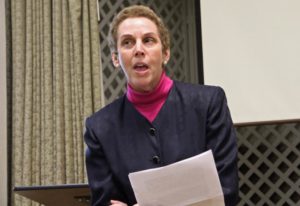 Mud is already flying in the three-way race for a local Democratic state Senate nomination.

Yesterday Arlington School Board Chair Libby Garvey sent out an email blasting opponent Rob Krupicka, an Alexandria City Council member, for the Council’s stance on the relocation of thousands of military jobs to the Mark Center development on I-395. In a letter dated August 13, 2008, posted on Garvey’s web site, an Alexandria official writes that the Council supports what was then still a proposal for the military to use the Mark Center site.

Garvey argues that the lack of Metro accessibility and the likelihood of traffic congestion at the site makes for “a terrible situation.”

“I join with Sen. Webb, Sen. Warner, Rep. Moran and Rep. Connolly in their request to the Defense Department that they delay fully staffing the [Mark Center] facility until traffic mitigation efforts are completed,” Garvey wrote. She then pounced on Kupricka.

“I believe strongly that we should judge public officials by the decisions they make,” she said. “In this case, Rob Krupicka, one of my opponents for the Senate seat currently held by Patsy Ticer, made a terrible decision by giving the DOD a green light to locate the BRAC building at the Mark Center site. His candidacy for the Virginia Senate, like that of all of us running for that important position, should be evaluated according to the quality of our decisions.”

Krupicka responded with an email of his own, accusing Garvey of “distorting” his “record of leadership on transit and transportation for our community.” The email’s subject line: “Today this race got nasty.”

“This is a race between three good Democrats,” Krupicka wrote. “We’ve worked together over the years, and I’ve considered both opponents friends. So I’m disappointed that Libby decided to go negative.”

The email concludes with a call to action: “P.S. Let’s not let mudslinging stop us from making our community stronger. Can you contribute $25, $50, $100 or $250 today to help us bring new ideas to move us forward today?”