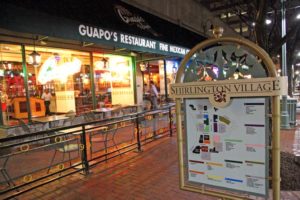 Speaker Boehner was joined by 8-10 people, who our tipster says were likely friends and staff members. The margarita-sipping crew left in two black U.S. Capitol Police SUVs around 10:00 p.m.

The visit — confirmed by a restaurant staffer — came on the same day that Tea Party members rallied in front of the Capitol to pressure Boehner and congressional Republicans to continue pushing for budgetary spending cuts. In case they’re wondering, the typical entree at Guapo’s is between $10 and $20.

Boehner is apparently a big fan of the Mexican cuisine at Guapo’s. He has been spotted there at least two other times in the past few months.

Our wonk-ish tipster hypothesizes that last night’s visit may indicate Boehner is planning on passing another short-term continuing resolution before finalizing the budget. After all, our tipster says, Boehner would otherwise be rushing to iron out key points in order for the budget to be “agreed to, finalized and posted by this coming Tuesday under their new 72 hour rules.”