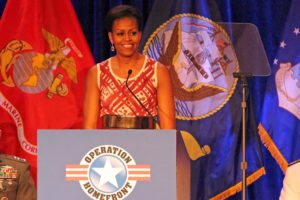 The Military Child of the Year Awards recognize the “strength, resilience and leadership” of military kids from each of branch of the armed services. The event, held at the Ritz-Carlton hotel, was organized by the group Operation Homefront.

Support of military families is one of Mrs. Obama’s signature issues. She spoke glowingly of the honorees’ maturity, wisdom and bravery.

“When our troops are called to serve, their families serve too,” Mrs. Obama said to an audience chock full of military officers, spouses and media personnel. “[Military children] play their own very unique role in keeping our country safe… their strength and support helps our troops serve.”

The five recipients of this year’s awards were: