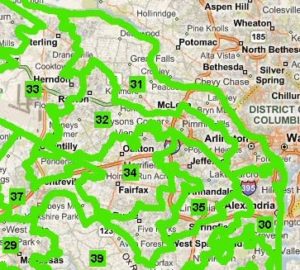 Virgina Gov. Bob McDonnell vetoed a redistricting plan approved by the General Assembly, adding another layer of drama to the local races for state legislature.

McDonnell, a Republican, said the districts in the Democratic-controlled state Senate’s redistricting plan did not “preserve communities of interest, ensure compact districts and maintain generally equivalent populations in each district.” That, the governor said, is a violation of state and federal law.

This is the first time a Virginia governor has vetoed a redistricting plan since 1981.

Senate Majority Leader Dick Saslaw, meanwhile, is accusing Gov. McDonnell of “playing politics” with his veto. He pledged to approve the exact same redistricting plan again while daring the governor to veto it.

The plan approved by Saslaw and the state Senate would have extended the Arlington-centric 31st District (above) into eastern Fairfax and Loudoun counties. McDonnell’s veto will throw the races for the 30th and 31st state Senate districts into a state of uncertainty — candidates will have no way of knowing the final boundaries of the district they’re running for.