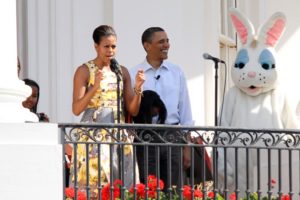 Arlington schools were granted 250 tickets by the White House for this year’s festivities on the South Lawn. Each of the five schools were chosen because they had not participated in the Easter Egg Roll in previous years.

The schools were each granted 50 tickets. The tickets were good for a noon admission — after President Obama’s official participation in the festivities, but still in time to see some of the invited celebrities and musical acts.

Glebe Elementary principal Jamie Borg arrived on an Arlington County school bus with dozens of preschoolers, a few fourth grade helpers and a couple of school staffers in tow. Borg said that many students were looking forward to seeing the First Family, but they had other things they wanted to do, in case the president decided to stay inside.

They’re hoping to see President Obama… but I think they’ll just be excited to see anything they can see,” she said. “They’ve been talking a lot about the eggs.”

See more photos from the school’s visit and from the egg roll ceremony itself, after the jump.