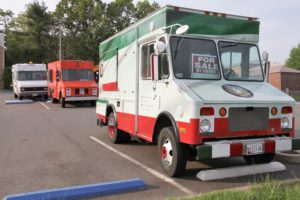 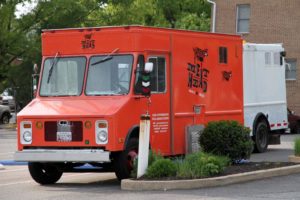 It appears that two District-based food trucks are dying an inglorious death in a Columbia Pike parking lot.

The trucks — Meathead Mobile Eatery and La Gloria Mexicana — were spotted cooling their heels last night in the parking lot of the former Bob & Edith’s Diner II location at 4707 Columbia Pike. Once free to roam the streets of D.C. and serve meals to hungry office workers, now they sit food-less on the Pike with “for sale by owner” signs in the window.

The trucks were both said to be a part of the Sauca food truck empire. Meathead Mobile served a menu of four meat-centric sandwiches. La Gloria Mexicana served quesadillas and other portable Mexican cuisine. The Twitter accounts of both trucks say they’re on “spring break.”

A third, unmarked truck sat in the rear of the parking lot — its potential for branded mobile food service thus far unfulfilled.