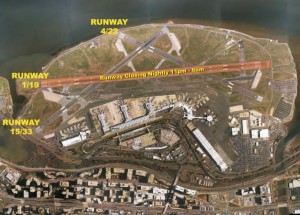 Through the end of 2011, crews will be working to rehabilitate the main runway at Reagan National Airport. The work will force the closure of the runway at night, and will result in more planes flying closer to Arlington.

There are no scheduled departures at DCA after 10:00 p.m., but there are about a dozen regularly-scheduled nighttime arrivals that will need to land on another runway after 11:00 each night, according to airport officials. The runway that’s most likely to be used is Runway 15/33, which points northwest/southeast. Depending on prevailing winds and weather, arriving flights will either be directed to approach from the northwest — thus flying over Rosslyn and the Pentagon — or from the southeast, over Southeast D.C. and the Potomac.

“They’re still landing right now at 12:05… [and] flying directly over Rosslyn,” said an anonymous tipster, in an email sent last night. “This will be a major headache for the rest of the year.”

Airport officials, however, suggest the impact will be minimal.

“The engines are generally running at a pretty low rate when an aircraft is landing,” which limits the amount of noise generated, he said.

Although weather could occasionally cause Runway 1/19 to stay open — thus putting nighttime flights back on their normal path — it could also cause delays and force departures and additional arrivals to be pushed back after 11:00 p.m. Yingling said that only planes that meet certain noise restriction requirements are permitted to take off after 10:00 p.m.

We reached out to Arlington County’s resident aircraft noise guru — County Board member Mary Hynes — regarding the runway issue but have not yet heard back.