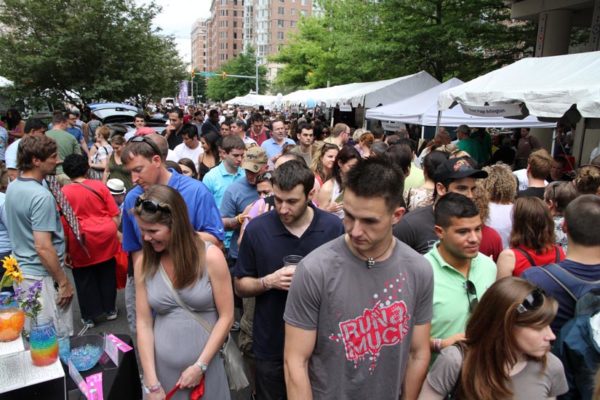 You would have thought that gray skies and the threat of rain would have persuaded more people to stay at home but, alas, Sunday afternoon’s Taste of Arlington in Ballston was as crowded as ever.

Long lines snaked up and down the rows of food and drink vendors, at times making for human (and dog) traffic jams. The lines moved relatively fast, though, and most restaurants had enough food on hand to last well into the 4:00 hour. The award for longest line goes to Sangam Restaurant (1211 N. Glebe Road), which was practically offering an entire Indian dinner (complete with dessert) for two tickets.

There were numerous local ‘celebrity’ spottings, as presenting sponsor WJLA hauled out half of its news team and as local pols angled for votes. Among those spotted in the crowd were WJLA reporters Pamela Brown and Scott Thuman, as well as County Board reelection candidate Walter Tejada, Commonwealth’s Attorney candidate Theo Stamos and state Senate candidate Barbara Favola. We even spotted David Gaines, the host behind the classic Arlington County TV segment, “Know Your County Wastewater Plant.”

Here are a few photos from around the festival.