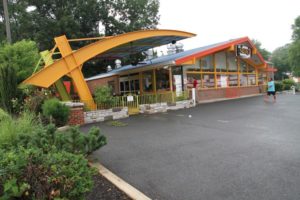 Its neighbors include a Goodwill store, two check cashing businesses and a service station. Two recent occupants of its building were shuttered and still hold sizable tax debts to Arlington County. Yet Sauca restaurant opened last night at 4707 Columbia Pike with a distinct sense of optimism.

“The history of this place has not been good,” admitted owner Farhad Assari, a former international investment banker who left a lucrative gig in Dubai to move closer to his family and pursue his culinary dreams. Like many other food entrepreneurs these days, Assari started small — launching several food trucks that served hearty world cuisine — before trying to translate his street success into a four-walls-and-a-roof restaurant.

Despite the building’s ignominious past and off-the-beaten-path location near Four Mile Run, Assari said he couldn’t imagine opening the restaurant anywhere else. 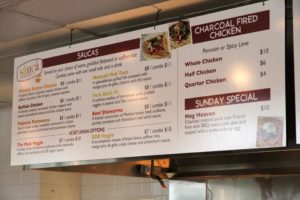 “This is exactly what I wanted, it’s as if they planned it for me,” he said. “I love it… I think we’re going to get people from all over.”

To achieve his vision for the restaurant, Assari has had to put in time and money — lots of it. The building could charitably be called a dump before Sauca moved in. Now it’s freshly painted, restored, landscaped and furnished. The interior looks like a traditional diner, but with a pool table, public internet terminals, eclectic decorations and a few flat screen TVs showing international soccer matches. Outside, under the funky curved roof, is a surprisingly lush patio with wrought iron furniture, Tiki torches and, eventually, a V-shaped lounge area and outdoor bar.

Despite the attractive space, ample off-street parking and battle-tested food, the restaurant will still face plenty of challenges. Convincing customers to travel to the western portion of Columbia Pike won’t be easy. While a nearby bike path and bus route offer convenient travel options, the restaurant will struggle to attract the car-less who stick to Metro corridors. Prices are fairly reasonable, but some locals may be reluctant to regularly shell out $7 to $11 for the sit-down version of Sauca’s popular food truck dishes (there are also soups, salads, sides and desserts on the menu).

Later this summer, after Sauca receives its liquor license, Assari plans to hold a grand opening celebration. For now, his tireless five-hours-of-sleep-per-night effort to get the restaurant off the ground — and possibly revitalize a sleepy commercial strip — will continue.

“It’s a tremendous amount of work, but it’s done with love,” he said.