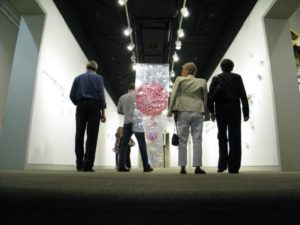 As officials continue trying to stem the tide of red ink at Artisphere, Arlington’s new arts and cultural center, the Arlington Commission for the Arts sees the need for more art venues down the road.

The commission and its consultants have just released a draft copy of “Arlington Arts 2030,” a report that proposes “a long-range strategy for supporting the arts over the next 20 years.”

The report recommends that the county “pro-actively and steadily move… [from] supporting the arts in a manner appropriate for a suburban community to one of building the arts to support the growing urban community that Arlington is today.” To that end, the report recommends increased investment in the arts, art facilities and the artists themselves.

Among the draft recommendations:

Currently, according to county officials, there are ten individual, publicly-accessible theaters in Arlington, each of which receives some sort of county support. That’s in addition to one county-run outdoor amphitheater. There are also 15 individual visual arts galleries in Arlington, six of which are managed or curated by the Cultural Affairs Division. Two of the theaters and three of the galleries are within Artisphere.