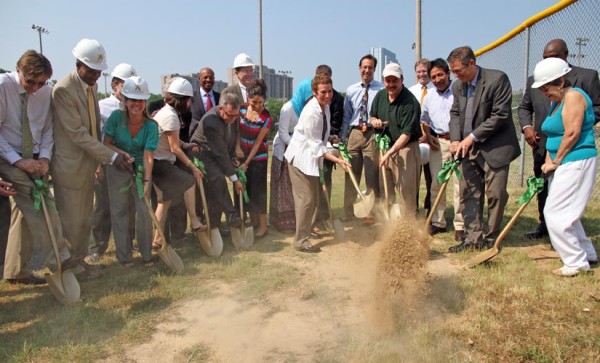 Over the next 2-3 years workers will build a 380,000 square foot school to replace the existing, 60-year-old building. The new Wakefield will feature 50 classrooms, state-of-the-art science labs, a 625 seat auditorium, a media center, two new athletic fields, two gyms, two pools, a diving well and a geothermal heating and cooling plant.

“It’s a very significant investment that’s going to be a great asset to the county,” said County Board Chairman Chris Zimmerman. “Obviously, investing in the kids is the most important aspect of it, but it’s also something that’s going to provide services to Arlingtonians who don’t even have children in the school system. It’s a commuinity center, as all schools are. It will be a great symbol for the county.”

Arlington Public Schools Superintendent Dr. Patrick Murphy said the new Wakefield is a testament to the hard work of school employees, supporters and students, past and present.

“There has been a lot of energy and focus, and a lot of community involvement,” Murphy said. “I think it sends a really strong message about the belief in public education”

The new building is expected to be ready for occupancy by July 2013, with final project completion by the spring of 2014.