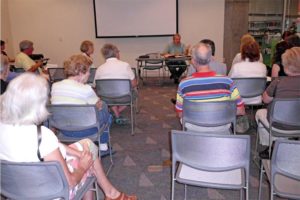 About two dozen people showed up at the Shirlington Library to respond to draft recommendations put forth by the Arlington Commission for the Arts and its consultants regarding the future of the county’s arts scene. A previous proposal was developed in the 1990s, and the Commission is seeking a new plan to outline the next 20 years.

Arlington Arts Commission Chair John Seal explained that the proposal assumes the county will continue its current push toward urbanization. He said additional venues, funding and availability of arts is necessary to keep up with the trend.

Angie Fox, president of the Crystal City Business Improvement District, expressed concern — not necessarily with an increase in arts funding, but with the overall focus of the commission. Fox believes, for instance, that the commission should not concern itself with what it doesn’t necessarily excel at, like facilities management. She also takes issue with the proposed allocation of money.

“There’s no real new mission statement,” Fox said. She believes the commission report fostered the attitude of “let’s just give money to the same things we’ve been doing.”

This resonated with others in the group, who believed shifting around funds could be more effective than outright requesting more. Nikki Hoffpauir, Board President for The Arlington Players theater company, pointed out that it’s not just money falling victim to mismanagement, but underused facilities as well.

“There are ways you could use what you already have to help us better,” she said.

Several attendees questioned parts of the proposal suggesting expansion, such as the recommendation to build a new outdoor amphitheater in the Shirlington/Four Mile Run area. Arlington County already has such a facility — The Lubber Run Amphitheater. After years of cuts and declining use, the facility had fallen into disrepair, but is currently undergoing renovations. One woman pointed out that although she’s a supporter of Lubber Run Amphitheater and its repairs, these types of facilities are simply “unpopular in our area.”

Marsha Lederman, who supports Lubber Run’s renovation, questions the validity of building a new facility when the other can barely survive. “I’m concerned because the other idea sounds great,” Lederman said, “but don’t sacrifice Lubber Run.”

An area which received largely positive reception is the recommendation for better marketing of Arlington’s arts. Seal said many avenues of communication have emerged that couldn’t have been imagined when the previous proposal was being drafted. The internet was in its infancy, much less social media networks or smart phones. He said a major goal should now be to update marketing strategies, and to target those who use such forms of communication, namely the young.

Residents suggested that in addition to using marketing for bringing in art patrons and donors, it should be used for soliciting artists as well. A couple of people noted that there are facilities in Arlington which remain under-used, simply because artists aren’t aware of the opportunity. They expressed interest in the county proactively reaching out to artist groups and offering more reasonably-priced studio space.

A primary goal of the proposed arts marketing overhaul also would be to brand Arlington as a “cultural destination.” Seal says economic development strategy plans recognize that arts and culture are assets which attract businesses to our area. He says that Synetic Theater alone brought an additional $3.75 million in revenue for restaurants in the Crystal City area, and the same could happen to other parts of Arlington, both on and off the Metro corridors.

“Forecasting how the county will look is hard… but 20 years ago we made decisions to support the arts and it turned out well,” Seal said.

Residents still have the opportunity to submit concerns or ideas to the commission for about another week via its email address, [email protected]