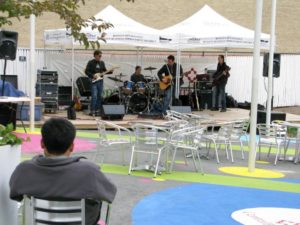 With temperatures expected to reach into the mid-to-upper 90s over the next two days, the Rosslyn Business Improvement District has decided to nix three of its signature outdoor events.

Despite the forecast of triple-digit temperatures on Friday, the BID has so far not pulled the plug on its outdoor film festival, which is scheduled to feature 90s comedy Austin Powers: International Man of Mystery. The films start at dusk on Fridays.