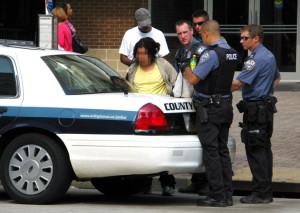 (Updated at 11:10 a.m.) An arrest has been made in the case of two female bank employees who were splashed in the face with a caustic liquid in Ballston two weeks ago.

On the afternoon of July 19, a man approached the employees outside the Capital One Bank in Ballston Common Mall and allegedly threw a liquid at them. Although the liquid was later determined to be “non-hazardous,” it reportedly caused the women to suffer a burning sensation and the inability to open their eyes. The man fled the scene and managed to elude police.

On July 29, however, police say the suspect was spotted near the bank again. Officers took the man, identified as 33-year-old Rodolfo Caguay of the District, into custody. He’s charged with Malicious Wounding by Caustic Substance.