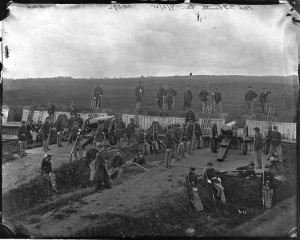 It’s hard to imagine now, given the county’s tree-lined streets and abundance of leafy parks, but during the Civil War much of Arlington was a tree-less, barren wasteland.

Thanks to its key strategic location across the Potomac from the District, Arlington County was home to 22 Union forts during the Civil War. In order to see an approaching enemy, soldiers often cut down 1-2 miles of trees around each fort.

The photo, left, illustrates just that. Fort C.F. Smith, now a county park along the George Washington Parkway in North Arlington, was surrounded by a denuded landscape that allowed soldiers to mount an effective, fortified defense against any Confederate force that might have tried to invade attack Washington.

Civil War historian Dr. Walton H. Owen II, author of Mr. Lincoln’s Forts: A Guide to the Civil War Defenses of Washington, says that while large expanses of trees were cut down, some were spared.

“Contrary to what many people believe, not every tree was cut down,” Owen said. “Trees located around homes that provided shade were often saved because that was the Civil War equivalent of air-conditioning.”

The means by which the trees were cut down is fascinating in its own right. Owen cited a quote from the book The Seventy-Ninth Highlanders: New York Volunteers in the War of the Rebellion, published in 1886, that discussed the domino-like felling of an entire forest.

It was an interesting sight to witness the simultaneous falling of a whole hill-side of timber; the choppers would begin at the foot of the hill, the line extending for perhaps a mile, and cut only part way through the tree, and in this way work up to the crest, leaving the top row so that a single bow would bring down the tree – then, when all was ready, the bugle would sound as a signal, and the last stroke of the axe be given, which brought down the top row; these falling on those below would bring them down, and like the billow on the surface of the ocean, the forest would fall with a crash like mighty thunder.

For the next four years Arlington and the rest of the country will be marking the 150th anniversary of the Civil War. Among the upcoming events planned in commemoration, the Virginia Civil War HistoryMobile will be camped out at the Arlington County Fair from Wednesday to Sunday.