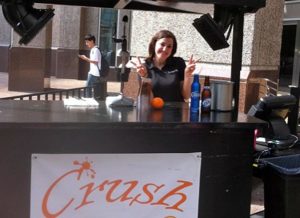 Some restaurants say the darndest things… when they go on Twitter.

Buttoned-up and professional inside, these restaurants become your chatty pal when you follow them on Twitter. Sometimes outspoken, sometimes outrageous, sometimes attention-seeking, and occasionally Tweeting about something legitimately restaurant-related, these eateries have a personality on social media that has little to do with to the experience of going there and having a meal.

We have selected L.A. Bar and Grill (2530 Columbia Pike), T.H.A.I. In Shirlington (4029 Campbell Avenue) and The Front Page (4201 Wilson Blvd) as Arlington’s Most Outspoken Restaurants on Twitter.

Whether it’s pontificating on the off-season signings of the Washington Capitals, telling someone who just went to a competing restaurant to “try us… next time” or calling Comcast a bunch of “a–holes,” these restaurants are unafraid to deviate from the normal sales pitches that one might find on the Twitter accounts of larger, corporate-owned restaurants.

“It’s just something to have fun with, not to be too serious,” said Sean Deloatche, general manager of L.A. Bar and Grill. “A lot of our regulars, to be honest, aren’t on Twitter. It’s more towards our younger crowd.”

Deloatche, who runs the restaurant’s Twitter account, says that it’s not about trying to sell more food or drink, it’s about having a conversation with customers.

“Every bar has to be more serious on Twitter, but that’s not the way we talk to our customers anyway,” he said. “We can say things that every other bar wants to say, but can’t. We are like a neighborhood dive bar, and we play to our strengths. We don’t try to be anything that we’re not.”

See examples of Sean’s nontraditional Tweeting, and the Tweets of the two other “outspoken” restaurants, after the jump.