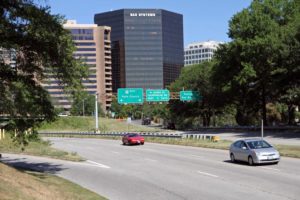 A man holding a huge “Abortion is Murder” sign has been targeting Route 50 commuters in the Rosslyn area this week.

According to tipsters and police dispatches, the man stands along Route 50 during the morning and evening rush hours, holding the graphic sign for all to see.

“You may have already heard about this, and the police knew about it when I called the non-emergency line, but there is a hideous Abortion is Murder banner right before the Rosslyn/Key Bridge exit on Rt. 50 Eastbound,” a tipster told us this morning. “It’s about 10 feet wide, maybe 3 feet tall, and incredibly graphic.”

Another tipster had a few more details.

In the past week, I have seen a white male in his early 30s standing near the Marine Corps Memorial on 50E/50W (Rosslyn exit) holding a large sign of with grotesque pictures of supposedly aborted fetuses at 10 weeks. I have twice seen Arlington or U.S. Park police escorting this man away and asking him to take down the sign. I assume he does not have a permit or it is illegal to protest on federal grounds or in areas that may cause traffic disturbances. But today he found a better hiding place. I really don’t want to give him any publicity, but I don’t appreciate being inundated with those images on my morning and evening commutes.

END_OF_DOCUMENT_TOKEN_TO_BE_REPLACED

More Stories
Morning Poll: How Do You Feel About the Local Economy?Arlington Plans 9/11 Commemorations