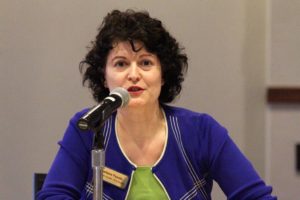 The 31st District state Senate race is muddier than the racing piglets after yesterday’s downpours. It’s gotten so bad that even Fox News has taken note of the intraparty quarreling.

In the latest round of mudslinging, Barbara Favola is being accused of making “racist comments” regarding the electability of her Democratic primary opponent, Jaime Areizaga-Soto — a charge she is calling “flat out untrue.”

Local Democratic blogger and Areizaga-Soto supporter Lowell Feld says he received a call from Favola last week in which Favola — thinking she was talking to a potential voter and not a vocal online critic — implied that Areizaga-Soto was unelectable because few Latinos live in the 31st District. Favola reportedly also noted that many of the donations to the Areizaga-Soto campaign have come from the candidate’s friends and family in Puerto Rico. 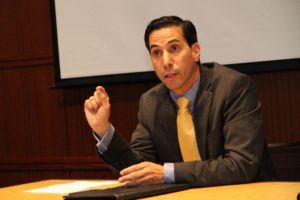 “I urge all Democrats — and especially my fellow Democratic elected officials — to condemn Barbara Favola’s racist statements that Jaime Areizaga-Soto cannot win or effectively represent us because of his ethnicity,” said Del. David Englin in a statement. “I expect Favola’s campaign will dismiss my comments because my wife is a paid consultant for Areizaga-Soto. However, regardless of my wife’s role in this election, racism is unacceptable, and Democratic voters, activists, and leaders should reject it.”

“It is the same thinking that drove attacks on John F. Kennedy and Barack Obama,” said Del. Scott Surovell. “To suggest that someone like Jaime Areizaga-Soto is unelectable in Northern Virginia because he is Hispanic is not just wrong, it runs counter to our experience in the House of Delegates, the broader nation, and common sense.”

“I can’t think of any justifiable reason why anyone — particularly a Democratic officeholder — would say such things about an ethnic minority candidate,” said Del. Mark Keam.

Favola’s campaign, meanwhile, is fighting back by accusing the Areizaga-Soto campaign of “sink[ing] to a new low.”

“I am deeply saddened by the latest false attacks from Jaime Areizaga-Soto and his supporters,” Favola said in a statement. “It’s an egregious assault on my character and the values I live by in my personal and public life.”

“This started with a local blogger — one of Jaime’s biggest supporters — who has hurled baseless accusations against Barbara throughout the campaign,” Scott said. “He admitted his account of his recent phone call with Barbara was only the best of his recollection. Now, Mr. Areizaga-Soto’s campaign sponsored website, staff, and supporters have leveled allegations based on hearsay and comments taken out of context.  It’s completely irresponsible.”

Update at 2:15 p.m. — Jaime Areizaga-Soto campaign has issued a statement: “My campaign is about fighting for our entire community. I’ve lived the American dream and I’m disappointed that my opponent thinks so little of the voters of the 31st that she’d think mentioning my ethnic background would win her votes. It’s worth noting that Favola has not denied the acts, merely the interpretation. I’m grateful to the five Delegates for speaking out – including two who have not endorsed me in this race.”