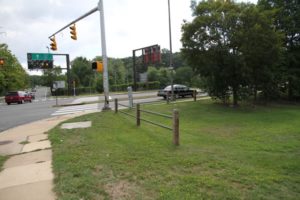 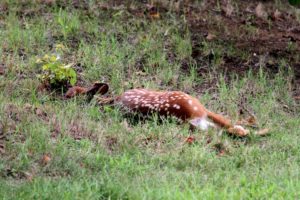 This morning, just before 8:30, a small deer was struck by a vehicle on a ramp from Sycamore Street to I-66, in East Falls Church. The gravely injured deer apparently stumbled down to the corner of Sycamore Street and 19th Street, where it collapsed and died in a grassy yard next to the southbound Sycamore Street sidewalk.

Three and a half hours later, the deer is still there and visible to passersby.

Arlington Police, called to the scene after the deer was struck, left shortly after confirming the deer was dead and placing a call to the county’s animal control contractor. But we hear that the Animal Welfare League of Arlington, which performs animal control and sheltering services to the county under a contract worth more than $1.2 million as of FY 2010, has told police that it may take a while to pick up the deer since there’s only one animal control officer working today.

ARLnow.com has been told in the past that animal control is often short-staffed in Arlington. A message on the League’s answering machine said its main offices were closed today.