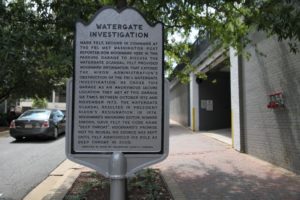 It’s not the most conspicuous sign in the world, but there’s now a permanent historical marker next to the Rosslyn garage in which Mark “Deep Throat” Felt met up with Washington Post reporter Bob Woodward to discuss the Watergate scandal.

The text of the marker describes how the nondescript garage at N. Nash Street and Wilson Boulevard helped unravel the political scandal that ultimately resulted in the resignation of President Richard Nixon.

“Mark Felt, second in command at the FBI, met Washington Post reporter Bob Woodward here in this parking garage to discuss the Watergate scandal. Felt provided Woodward information that exposed the Nixon administration’s obstruction of the FBI’s Watergate investigation. He chose the garage as an anonymous secure location. They met at this garage six times between October 1972 and November 1973. The Watergate scandal resulted in President Nixon’s resignation in 1974. Woodward’s managing editor, Howard Simons, gave Felt the code name “Deep Throat.” Woodward’s promise not to reveal his source was kept until Felt announced his role as Deep Throat in 2005.”

Don’t be fooled by the words “erected in 2008” on the marker; it was actually installed by Arlington County on Friday, after a three year delay.

Within the garage itself, another sign marks the exact spot where Felt and Woodward would meet. The garage owner has marked parked spot 32D, located in a dark corner of the garage, as the two men’s once-secret meeting place.

In addition to the Watergate marker, the county recently erected two other historical plaques.

A marker at the corner of Fairfax Drive and Glebe Road, in Ballston, marks the Lacey Car Barn site. The text reads:

“In 1896, the Washington, Arlington & Falls Church Railway began running electric trolleys from Roslyn to Falls Church on the present routes of Fairfax Drive and I-66. By 1907, the Fairfax trolley linked Fairfax, Vienna, and Ballston with downtown Washington. In 1910, at this location, the railway built a car barn, railyard, workshops, electrical substation, and general office. In 1912, the rival Washington & Old Dominion Railway began crossing the tracks on a bridge 200 yards west of here, following the present route of I-66 from Rosslyn. The Fairfax trolley closed in 1939, but Metrorail’s Orange Line follows its route through Arlington.”

The third marker is located off of Chain Bridge Road, just before the bridge itself. The plaque commemorates Pimmit Run, site of a Native American settlement, 18th- and 19th-century industrial plants, and a refuge for important historical documents like the Declaration of Independence during the War of 1812.